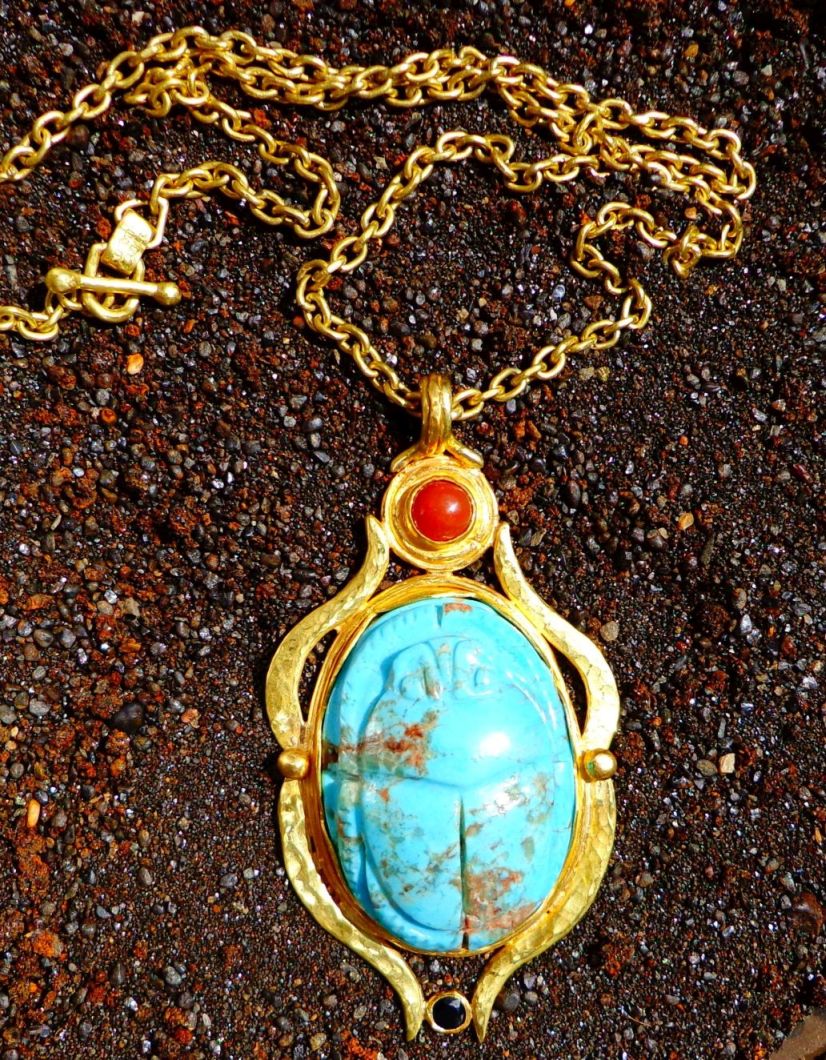 This necklace was inspired by the scarab beetles in ancient Egyptian jewellery. For the ancient Egyptians, the scarab was considered to be the force which gave birth to the sun by pushing it over the horizon each day, symbolizing renewal and resurrection.

Here is a photo showing one of many of the scarabs found in ancient Egyptian jewellery.

The scarab was also a symbol for psychologist Carl Jung, representing the force of significant coincidence or synchronicity, the deeper meaning of seemingly co-incidental events.

This pendant is based on a hand carved turquoise scarab, which the woman who commissioned the piece from me had purchased some years ago in her travels to Egypt. The fact that she is a Jungian psychologist gave it special significance for her.

I set the turquoise scarab in a scalloped bezel, similar to one I saw in a photo of an ancient Egyptian piece.

The fiery sun which the scarab is pushing is a Mexican fire opal. In their ancient jewellery, the Egyptians often used carnelian of a very similar colour to this opal. You can see a carnelian used to represent the sun in the photo above of an ancient Egyptian scarab.

The Jungian psychologists say that all life forces are balanced. I have used a dark blue sapphire to represent the dark balancing the light of the opal as the sun.

The body of the pendant is of natural 20K gold from our gold mine, with some 24K details, such as the balls at the leg joints. I hand shaped the legs and then textured them with a hammer. The bail on the piece is 20K gold with an accent of 24K gold. The pendant is designed to be worn on the accompanying chain, also handmade of our 20K gold. The chain is fairly heavy to support the piece, both physically and visually. It closes with a hand made 20K toggle clasp.

I like this piece because it is reminiscent of exotic, ancient Egyptian jewellery, which I find fascinating. I also like the layers of symbolism involved in it, invoking the constant renewal of light, and thus, life.  One of my favorite writers, Doris Lessing said  “Synchronicities are the universe’s way of telling us that there is more to reality than meets the eye. Coincidences are everywhere and can happen any time. When your soul is ready, they will come. All that is required is that you open your heart.”

This site uses Akismet to reduce spam. Learn how your comment data is processed.